How does the powerful Sony Alpha 1 stack up against the less expensive Canon EOS R5 when it comes to video performance? LensProToGo has shared a video comparison that puts the two cameras against one another in an 8K shootout.

Announced early in 2021, the Sony Alpha 1 mirrorless camera is referred to by the company as its “professional movie camera,” as it can deliver 8K video footage of up to 30 frames per second. The Canon EOS R5, which can also deliver 8K video footage, has not been heavily marketed as a video tool since the initial teasers since its primary focus is for still photography (and it suffers from overheating issues). According to company, the inclusion of 8K was a spec that was included simply to beat competitors to the punch and wasn’t one that should necessarily be used heavily.

The price difference between the two systems is a significant factor for interested buyers who want to shoot 8K though, and while it’s not the R5’s strong suit, the major gap in cost may still pull some photographers to select it over the Alpha 1 (the Sony Alpha 1 is currently priced at $6,498 and Canon R5 at $3,899). While on paper they are identical, are there any tradeoffs that warrant the major differences in price?

To test out a real-life difference between the two cameras when it comes to video shooting, Dom from LensProToGo put together a comparison to see how both cameras perform in various tests. The Canon EOS R5 offers several 8K shooting options, divided by aspect ratio and different compression modes, while Sony Alpha 1 gives fewer choices for users.

First, Dom addressed the heating issue of Canon R5 by testing how much 8K footage could be recorded on both cameras over two hours with a full battery and all auto functions and IBIS turned off. This particular test was developed in lieu of simply seeing which camera overheats quicker, as it is likely that Canon would be the worst performer there.

During this experiment, Dom had to let the Canon R5 cool down after the first 22-minutes of filming, followed by a sequence of filming and cooling down periods until the two hours were up. This gave him a total of 49 minutes of 8K footage. Compared to Sony Alpha 1’s more practical outcome of 117 minutes, where no overheating occurred, Sony outperformed Canon by a significant margin. Don did note that although the Alpha 1’s exterior was rather warm to the touch, the only time-out required was due to a depleted battery or a full memory card. 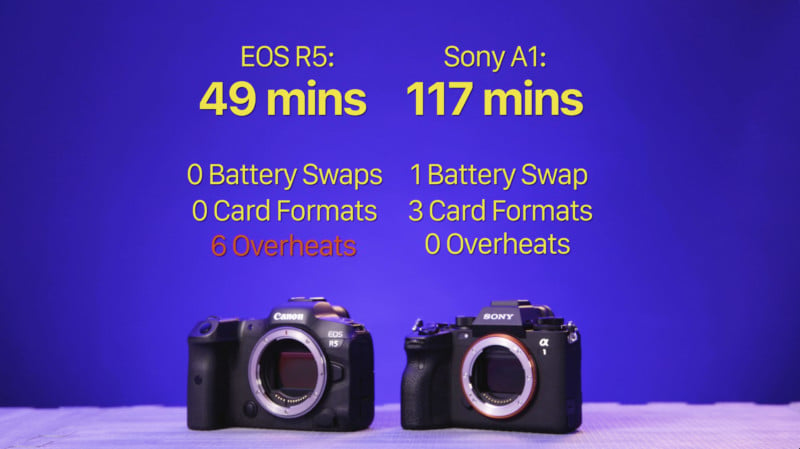 In regards to the quality of the 8K video, the tests showed that the difference was rather negligible between the two systems. When forced to truly pixel-peep though, Dom says that Sony seemed to come out sharper. In an autofocus test — which is not always a truly fair comparison as it depends on the individual lens performances — Canon appeared to deliver faster and more precise autofocus tracking. 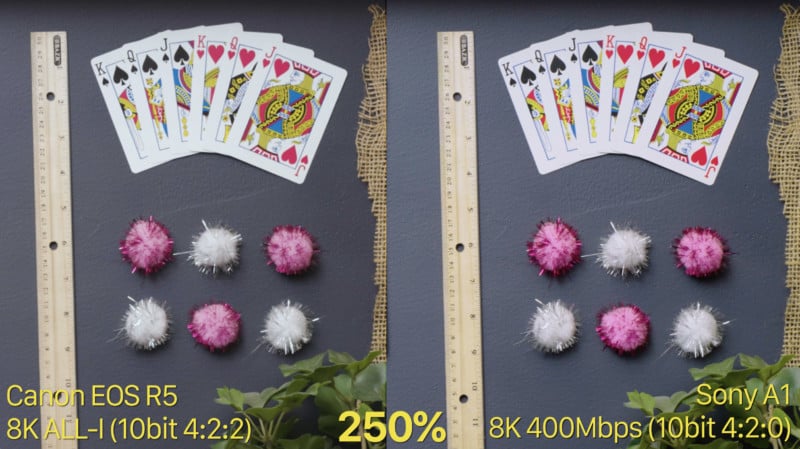 Other tests that were performed — such as color, skin tone, and low light comparisons — were interesting, but may not necessarily result in an objective conclusion. These factors are heavily dependent on a specific user’s taste and preferences. 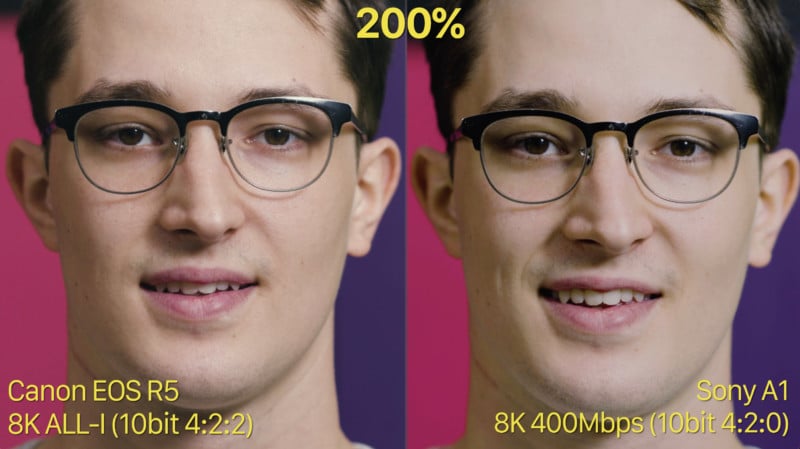 Overall, both of the cameras are capable of delivering high-quality video and good performance, each with its own pros and cons. However, Dom concludes that despite some of the performance issues associated with the system, the Canon R5 is the more flexible option, whereas Sony Alpha 1 stands as the more reliable choice. Its higher price is a major detractor though and puts it out of reach for many.

More equipment reviews and comparisons can be found on LensProToGo YouTube channel where the team posts regular videos of recent photo and video gear.

Image credits: All images provided by LensProToGo and used with permission.

Huawei's HarmonyOS already has 134,000 apps, over 4 million developers have signed on