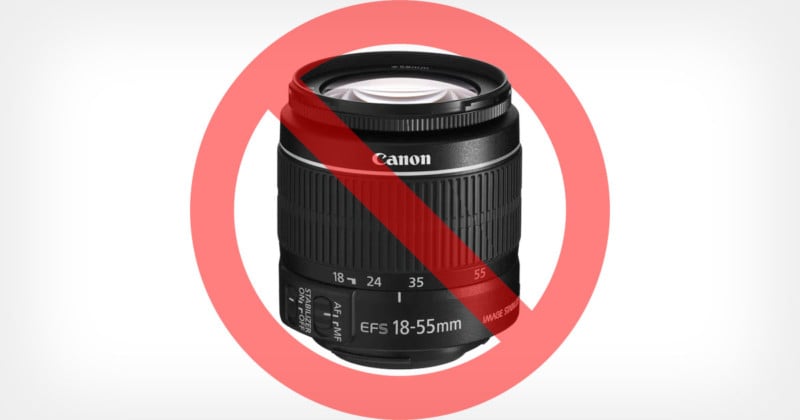 It’s often said that “the best camera is the one that’s with you,” but one college photography instructor doesn’t seem to agree: she has banned the students in her course from using kit lenses.

In case you’re not familiar with camera equipment, entry-level cameras are often bundled with cheaper (generally 18-55mm zoom) lenses that allow aspiring photographers to immediately start shooting photos without having to buy a separate lens for their new camera.

These starter lenses usually feature a weaker plastic build and have a more limiting variable aperture range, but they offer a flexible focal range that allows users to dabble in a wide range of photography genres — you can even flip the lens around to do some reverse lensing macro photography.

There’s one photography teacher at a university in North Carolina who doesn’t think much of these 18-55mm lenses, though. Her course syllabus prohibits her undergraduate editorial photography class from using them: 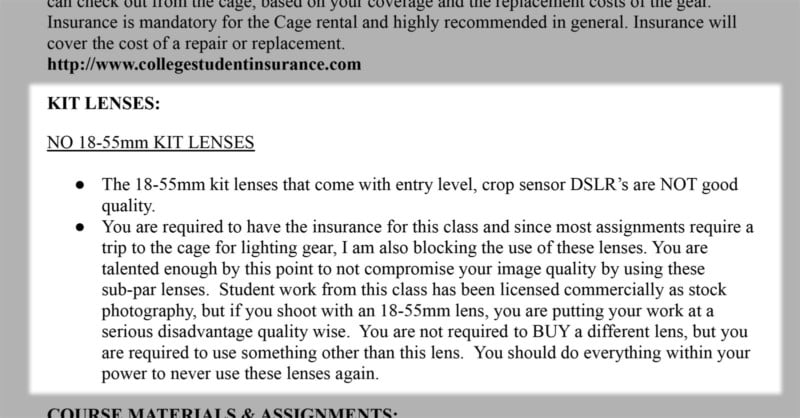 “The 18-55mm kit lenses that come with entry level, crop sensor DSLR’s are NOT good quality,” the syllabus states. “[…] You are talented enough by this point to not compromise your image quality by using these sub-par lenses.

“Student work from this class has been licensed commercially as stock photography, but if you shoot with an 18-55mm lens, you are putting your work at a serious disadvantage quality wise.

“You are not required to BUY a different lens, but you are required to use something other than this lens. You should do everything within your power to never use these lenses again.”

The teacher advises students to avoid kit lenses at all costs due to their “subpar” image quality, but there are many published photographers out there who would beg to differ.

Read also: Your Kit Lens is An Excellent Lens

The syllabus above was recently shared on Reddit by a student in the class who wishes to remain anonymous, and it sparked a lively discussion among photographers who largely disagree with the instructor’s point of view. The general consensus is that while kit lenses may not stack up well against pricier lenses, they still get the job done and are more than appropriate for beginning photographers to cut their teeth on.

“The newer generation of APS-C kit lenses […] really aren’t bad, and older full frame kit lenses are more than adequate for all but the most demanding of applications,” the student writes. “[…] This just seems asinine.”

“I’m disappointed in the focus on costly and inaccessible equipment,” the student tells PetaPixel. “Making the best of inexpensive and lightweight gear is a more pertinent skill — without exception, the best camera is the camera you have.”

Rumor claims the vivo X70 will have a 1/1.5" camera sensor with gimbal stabilization