Polaroid has been on a tear of partnerships and collaborations over the past several months, the latest of which is a deal with Fendi that covers a Polaroid OneStep Close-Up 600 in a “FF Vertigo Motif” that is on sale now for $950.

Fendi describes the FF Vertigo design as a “magnetic motif offering a twisted, turned version of the classic FF logo — and FF Fisheye motif — where the signature FF logo appears wavy and fluid as it is seen through a fisheye lens.” The design, and therefore the exterior camera, was created by New York-based artist Sarah Coleman who Fendi says is most well known for her “disruptive manipulation of designer’s materials” that she uses to “rethink and repurpose everyday objects with an ironic filter.” This is the second design collaboration Fendi has taken with Coleman, who also worked on the fashion brands’ Design Miami 2020 edition. The camera itself is the standard Polaroid 600 camera which has been used as the core of several collaborations over the past few months. In mid-March, Polaroid partnered with Lacoste to release a gator-themed Polaroid 600 and a whole line of clothes that use Polaroid branding and colors. In early May, the company partnered with sandal brand Teva and released a Polaroid 600 that shared Teva branding and was made up of at least some refurbished parts. Teva also released a series of sandals that leverage Polaroid’s brand. 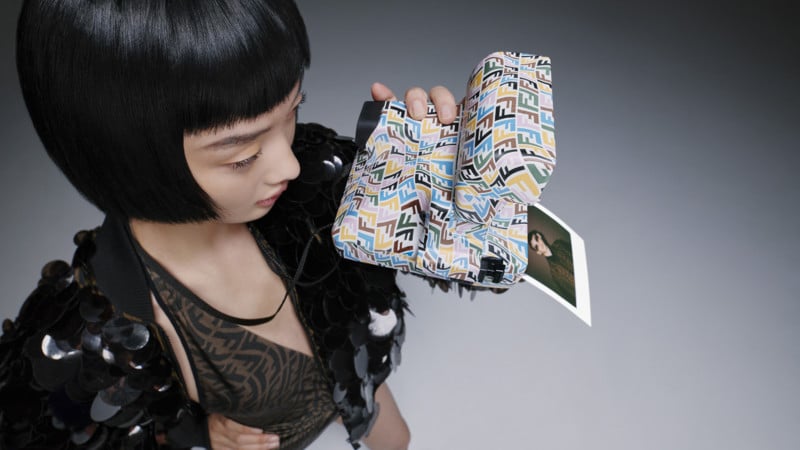 In this collaboration with Fendi, it doesn’t appear as though the fashion brand will release any clothes that use the Polaroid branding as the last two partnerships did and instead will simply stick with the wildly-skinned Polaroid 600 camera.

The camera — using highspeed Polaroid 600 film, which requires less light, combined with a built-in flash and fixed focusing — forms an incredibly versatile instant film experience that’s easy to use and excels in nearly any situation. The Polaroid OneStep Close-Up 600 camera includes a 110mm lens, f/10 aperture, fixed focus lens of 4’–infinity plus a sliding close-up lens (for photos from 2’-4’), built-in flash (with manual override), and is compatible with Polaroid 600 film.

Because of the high price, it is unlikely that anyone who purchases the camera intends to use it as one, and it is more likely to find itself on a shelf as a collector’s item or art piece.

With these partnerships, Polaroid seems to be taking a page out of Leica’s book. While both companies are focusing on releasing standard products that appeal to core audiences, both brands now clearly are going strong into licensing and special edition models to help finance growth. The $950 Polaroid 600 will only be available in Fendi boutiques and Fendi.com.

Dear Apple: I tried loving AirTags, but I don’t...

Review: The Insta360 One R is a modular action camera with a 1"-type sensor: Digital Photography Review