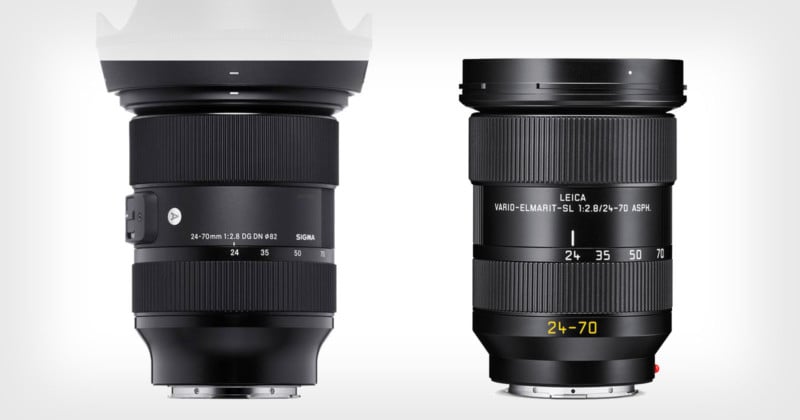 Leica recently announced that it would be bringing a 24-70mm f/2.8 to its first-party L-mount lens lineup, but there has been speculation that the lens is simply a rebranded Sigma Art optic.

As Leica Rumors originally reported, while there appears to be no official confirmation that the two lenses are the same, a close examination of the technical specifications indicates that they are: The construction of both the Sigma 24-70mm f/2.8 DG DN Art and the Vario-Elmarit-SL 24-70mm f/2.8 ASPH. share a lot in common.

According to official press materials provided by Leica, the Vario-Elmarit features 19 elements in 15 groups with three elements with aspherical surfaces on both sides — for a total of six aspherical surfaces — and an 11-bladed aperture diaphragm. This description is identical to those found on Sigma’s official specifications for its Art lens.

Additionally, when lens diagrams are compared, the two appear to have an identical construction.

In a conversation with PetaPixel, Leica noted that it has a strong relationship with its L-mount alliance partners and that the Vario-Elmarit-SL 24-70mm f/2.8 ASPH. is made in Japan, but stops short of specifically saying that it is a Sigma lens at its core.

It’s hard to look at the technical specifications of both lenses and not walk away with the conclusion that they are identical. That said, Leica did make other changes to its iteration of the lens that differentiate it from the Sigma model.

For one, it uses an all-metal housing which may make it more resistant to the elements — weather resistance is a repeated theme of importance to Leica. Additionally, Leica removed all buttons and switches from the exterior of the lens — even the manual focus/autofocus switch — which means that can only be adjusted from the camera itself, but also may make for fewer weak points where moisture or dust could sneak in and damage the internals. Additionally, Leica’s lens hood is made of metal.

Leica also broadly states that all of its first-party lenses are better matches for one another even if the L-mount is shared among Panasonic, Sigma, and Leica. So while all the lenses in the L-mount alliance are compatible with one another, Leica contends that overall each of the brands’ optics will likely perform their best with a matching camera.

Even if Leica were to confirm that the two lenses are optically identical — which it doesn’t seem keen to do — it wouldn’t be out of character. Leica has worked with partners in the past to release new versions of what are basically re-housed versions of previously available products. For example, the V-Lux was a rehoused Panasonic FZ1000 and the D-Lux was a Leica rebrand of the Panasonic LX1000.

In the end, it might come down to aesthetics. The Leica might appeal to some more than the Sigma, at which point they will have to decide if the Leica is worth the additional $1,736 over the Sigma.

The Sony X80J 75 Inch TV, smart lightbulbs and more devices are on sale